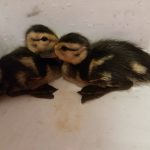 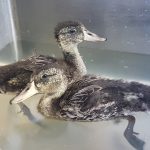 On our first day as interns, we were introduced to a couple of feathered friends named Doris and Delilah. These orphaned ducklings were handed over to Umkhumbi lodge from the local vets. It is now up to us to raise and rehabilitate them.

But, exactly what type of ducks they are remains a mystery. No one at the lodge has ever seen their kind – even bird specialists are left scratching their heads.

Our only hope in identifying them is to wait until they molt their juvenile feathers and enter the basic plumage stage – as adults, their fully matured feathers should help provide us with vital clues.

For now, however, we concentrate on giving them the best start in life.

When they first arrived at the lodge, the pair were just two days old and weighed around 36g.

They were a month old when us interns met them, and putting on weight fast –
Delilah weighed in at 250g and Doris at 284g.

They have been in our care for just over a week now and are growing by the day. Delilah now weighs 416g and Doris weighed 427g. On average the pair are putting on 25g a day!

Currently, Doris and Delilah are fed on a diet of grains which they have been on since they were born. Now they are getting bigger, we can start feeding them some treats such as fresh veg and fruit to bring some variety and excitement into their diet.

Each morning, we clean out their pen, replenish their food and water and exercise them with a swim in the sink – something they absolutely adore.

Over the past week, we have incorporated a few toys into exercise time, in the form of rocks and pebbles. They enjoy inspecting these with their beaks – tossing them around here and there – splashing us in the process!

Our next idea is to introduce some tennis balls to the water, a new unfamiliar object for them to investigate and play with. This, we hope, will help encourage natural behaviour,