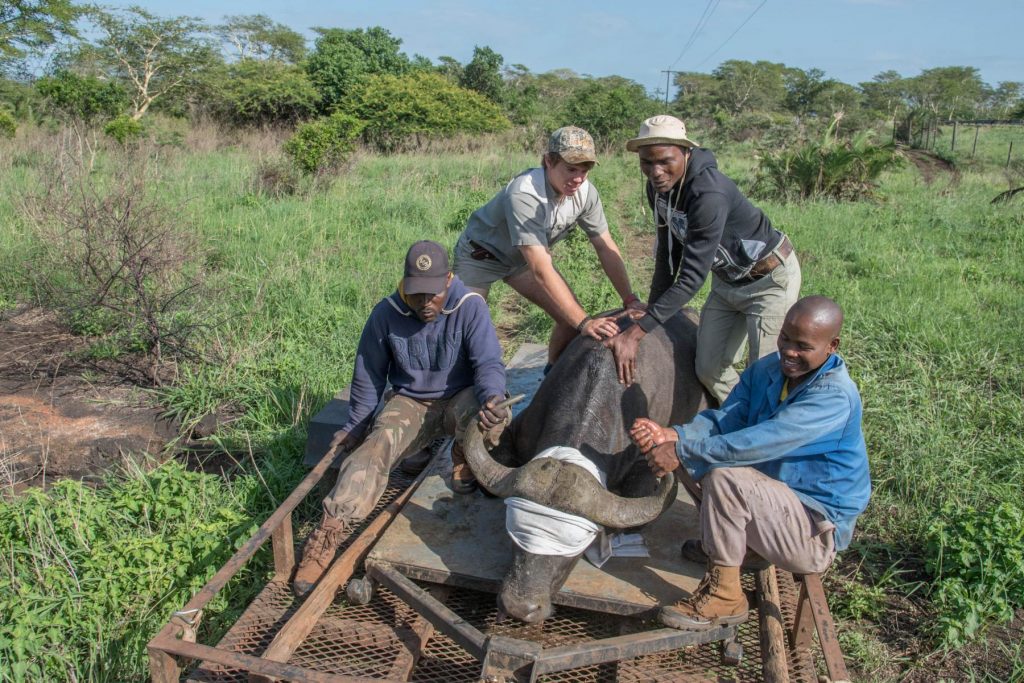 Me, Harriot and Logan started the day off at 5:15am getting in the truck and heading off to where the buffalos were. We thought that we were only going to dart and relocate two buffalos but it ended up being nine.

Once we arrived we got out of our truck and into the back of another. There was a small team of us with three in the helicopter one of which was the vet so he could then dart the buffalo easily, then twelve of us on the ground ready to go in with the trailer once the buffalo was down.

The first buffalo we darted was a big male which was an easy one to start with. The second one was a bit trickier as he decided to go down into small muddy waterhole which made it more difficult to get the trailer close to him. We had to chop down some branches to be able to get the trailer close so that we could get him out without too much struggle. After that the other four male buffalo went nice and smoothly without too many issues.

After the males, we then went to find two females and calf that needed to be moved. This was an easy one as the vet darted all three as they were together so we didn’t have to go and find the last female which would have taken longer. The calf and its mother was first to be moved we managed to fit them both on the back of the truck. When we got to where we were going to let them go as we were getting the mother off Harriot was keeping her head upright and as they were getting her off both buffalo and Harriot slipped down the metal platform they were on and Harriot ended up landing on top of the buffalo’s horns but luckily wasn’t hurt too badly, just a few bruises. After that little bit of excitement we then went back and got the last female.

In total we darted and relocated 6 male buffalo, 2 female and a calf.